Greetings from our Pastor! 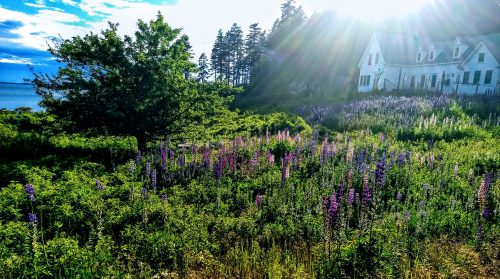 As a child, my parents often read me Barbara Cooney’s classic picture book, Miss Rumphius. And this week, on vacation in coastal Maine, I’ve had the pleasure of introducing Davie to the same book. It tells the story of Alice Rumphius, a young woman bent on traveling the world and exploring new places. After a back injury involving a camel ride, she achieves another life goal by coming back home to live by the sea in Maine. In her retirement, she is reminded of her grandfather’s advice to her as a child that she needed a third aim in life: “You must do something to make the world more beautiful.”

Not sure what her “something” could be, Miss Rumphius plants lupine next to her seaside cottage and notices that the following year, its seeds have traveled to the headland on the opposite side of the inlet. And thus her “something” is born: she will spread these beautiful flowers up and down the coast, as far as the eye can see.

We came to Maine at the height of lupine season, and I have to say I’m smitten. Every turn in the road presents another glorious composition of purples, pinks, and whites showing off with a humble groundedness – lupine is, after all, a cousin of the homely pea – that seems entirely in character with one of Maine’s other gems: its hard-working, unassuming people who yet have a bone-deep appreciation for the natural beauty surrounding them.

It’s safe to say that though she was a transplant from across the Atlantic, Hilda Edwards Hamlin, the real lupine lady on whom Cooney’s book is based, fit right in with her fellow Mainers in this respect. Near her summer home in Christmas Cove, Hilda “began planting lupine seeds imported from her native England. Every August she cut bundles of lupine stalks and shook out their seeds over a wider space. Then she began putting seeds in her pocket when she walked to the post office and strewing them along the roadside. She did it in secret, rarely telling anyone about her lupine obsession. Some friends knew; [Hilda] didn’t drive, and when [they] gave her a ride they’d catch her tossing lupine seeds out the window.”[1]

I can’t help but be reminded of the Parable of the Sower found in Mark 4:3-9, wherein a sower not unlike Hilda scatters seeds with abandon, apparently paying little attention to whether his seeds land on arable ground. His actions seem wasteful, particularly in a pre-industrial context where seeds were painstakingly harvested by hand. Nevertheless, some seed succeeds in falling on “good ground” and sprouts multitudes, yielding results beyond all expectation.

Did you notice, though, that Jesus doesn’t define what “good ground” looks like? Lupine, for example, grows best on roadsides, in ditches, and in abandoned fields. As a Down East magazine article advises, you’ll succeed in growing them if you plant “dozens of lupines in a horrible place and then ignore them.”[2]

As I enter into my second year here at Park Avenue (can you believe it?!), I’m struck by two things: first, like Miss Rumphius, we are being called by God to do something beautiful in the world. And second, we really can’t predict which of our efforts will take root, or where, or how. The best we can do is to sow enthusiastically, heads out the window like Hilda, and trust God to bless our endeavors – sometimes in unexpected ways.

This year I invite you look for ways, both personally and as a part of PACC, to keep sowing beauty and trusting God to turn a few ditches into roadside delights. My hope is that in the years to come, our community will be littered with the glorious results of our enthusiasm, fertilized with God’s surprising goodness. Will you join me?

With joy and gratitude,