Micah 6:8
God has told you, O mortal, what is good; and what does the Lord require of you but to do justice, and to love kindness, and to walk humbly with your God?

The Bible is full of agrarian images that, in this urbanized day and age, only a farmer would understand. But even an American farmer would have trouble grasping the full nuance of today’s image of sheep and goats being separated.

That’s because the most common breeds of sheep and goats in the US look very different: you have your woolly, fluffy sheep, and your hairy, bearded goats. But in many other parts of the world, sheep and goats look much more similar to one another; they can even resemble the exact opposite of our American images. Take a look at the picture on the front of your bulletin: the hairy, bearded creature on the left is a Barbados Blackbelly sheep, while the fluffball on the right is an Angora goat. 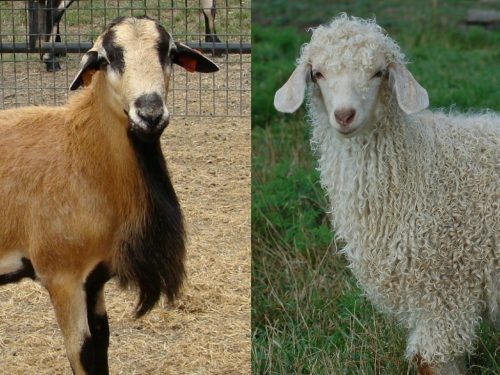 So how was a pastoralist in Jesus’ time to tell the difference?

You can differentiate sheep and goats, it turns out, simply by how they behave. Sheep, decide where to go based on the voice of the shepherd. Goats, on the other hand, go where they darn well please.

Here’s another way to describe the distinction: sheep follow the shepherd, but the goatherd follows the goats.

At first, this image of sheep doesn’t sound like something we should aspire to. Sheep are good at following because they are easily swayed; they tend to go with flock, as it were.  Goats, on the other hand, are curious, strong-willed, and independent-minded. Who among us doesn’t like to think of ourselves as making up our own minds? We don’t want to be seen as weak-willed followers; we’re taught to aspire to be leaders who will do what we dream rather than do what we’re told.

But there’s a flipside to going our own way. Have you ever Googled “goats getting into trouble”?  You will learn the age-old saying about goats and fences: if your fence doesn’t hold water, it won’t hold a goat. You will find pictures of goats stuck in fences they tried to escape, pictures of goats stuck in plastic lawn chairs and goats with their heads stuck inside plastic containers that caught their curiosity. You will find footage of a goat who broke into an office by butting the sliding glass doors, and even video of a goat dangling 20 feet in the air, its horns stuck in a telephone wire. No one knows how it got there!

With independence and curiosity come some tricky terrain; like goats, our free will sometimes gets us into trouble, dangling 20 feet in the air with no idea how we got here.

In our faith tradition, we don’t believe in mindless following; far from it! Yet we do believe that God holds our best interests at heart, and that God is forever calling, coaxing, nudging, and whispering us towards what will help us thrive, what will make us come alive. We believe that listening to God’s voice is a choice we get to make, but that doing so will lead us into a life of joy and abundance, a life where our deepest longings aren’t shepherded out of us but rather fulfilled, where our best desires are brought to life in a way that also heals the world.

But getting back to this morning’s scripture, we all want to help the poor, right? We all agree it’s a good idea to visit the sick, feed the hungry, clothe the naked, right? We don’t need a shepherd to herd us in that direction; it’s just the decent, moral thing to do.

That truth, however, doesn’t make it the easy thing to do. How many times have you thought to yourself that you should volunteer or go visit someone in need, only to have your own agenda, your busy schedule, push that thought onto the backburner?

It’s easy to romanticize service for those in need as light-filled and enjoyable; but sometimes it’s inconvenient, or it makes us feel uncomfortable. Depending on our experiences and levels of comfort, it’s not always easy to visit someone in the hospital or a nursing home, or to volunteer at a homeless shelter. And if you’ve never had to brave prison security to visit an inmate, let me just tell you it’s downright intimidating! Often times it feels easier to focus on our own little corner of the world.

That is why the Shepherd calls out to us – we sometimes need that leading, cajoling, reminding voice to go towards what is good instead of following our noses off into endeavors that may seem worthwhile at first but, in an eternal sense, are like having our heads stuck in a bucket.

Speaking of eternal, did you notice what sheep and goats get as their eternal compensation? For the sheep, it’s eternal life, while for the goats, it’s eternal punishment. That’s a pretty steep penalty for being a wandering goat! As you may remember from our discussion of John 3:16, however, the Greek word we translate as “eternal” doesn’t mean “forever,” so much as “timeless, beyond time.” The Greek word for “eternal” isn’t quantitative or chronological, but rather qualitative, metaphysical. It’s like the difference between saying “I spent 47 minutes with my child” versus saying “I spent quality time with my child.”

The goats going off to “eternal punishment” does not necessarily mean they’re going to burn in hell (a concept the Jews in Jesus’ time didn’t have), but that they’re in for some seriously torturous soul-searching.

Ebenezer Scrooge, the main character in one fo my favorite holiday stories, Charles Dickens’ A Christmas Carol, illustrates what it means to get your “eternal punishment” long before you die. As his three ghostly visitors show him how his indifference and self-involvement have wounded his loved ones and driven away friends, Scrooge cries out, “Spirit! Show me no more…Why do you delight to torture me?”

When we are able to view our lives through the lens of the eternal, through that which is timeless – through Jesus’ lens – we recognize our actions for what they are. We realize our callous lack of compassion and we feel the sting of our indifference keenly. Imagine discovering the full scope of the hurt experienced by every person you’ve hurt or ignored, by everyone who has been on the receiving end of your indifference about justice or mercy. I’m convinced that would be sufficient torture for any of us.

“Eternal life,” on the other hand – the reward for the sheep in this illustration – is the realization that our care for those who are oppressed and outcast is not merely feel-good busy-work, but the very thing that leads to true, deep, abundant life in the here and now – life in Jesus.

Jesus, after all, tells both the sheep and the goats that when they either cared for or neglected the hungry, naked, sick, and imprisoned, they were caring for or neglecting him.

Let’s stop and think about this for a second, because it’s one of the biggest, boldest, most mind-blowing claims of our faith tradition.  The very savior of the world did not come to earth just once over 2,000 years ago, but continues to be present to us in the very people we are most likely to push to the backburner. This text promises that we will find Christ in the least and last; that when we dare to get to know them, we will encounter him.

I can’t help but think of that other classic story, Mark Twain’s The Prince and the Pauper. Churches around the world celebrate today as Christ the King or Reign of Christ Sunday – yet where are we most likely to find this King who rules all creation? In those who are vulnerable, cast aside, lost. That our siblings who struggle are the very place Jesus tells us to find him says a lot about what kind of sovereign he is – and about the dignity and worth of every person, no matter how downtrodden.

I have to admit, I’m preaching to myself a bit here. It used to be easy for me to catch glimpses of Jesus in others – footing grocery bills for homeless friends; praying with inmates struggling with not being at home to raise their kids; rocking a hospitalized baby. But I’ve been rather goat-ish lately.

Maybe you can relate: as a wife and mom working full time and with my own interests and passions, it can feel like there aren’t enough hours in the week to look after anyone but my flock, my family, and myself (and not even all three of those sometimes!). None of those commitments is bad; us goats of the world aren’t awful people. We’re just used to taking care of our business and assuming we’ll encounter Jesus in our prayers and in church on Sunday morning, where we expect him to be.

I’ve noticed, though, that as I’ve gotten more wrapped up in checking off my to-do lists and crafting worship liturgy and looking after what’s “mine,” I’ve been missing Jesus.

That might sound odd, because as a pastor I’m breathing church – the place that’s all about Jesus! – 24/7. And a large part of my work is spending time with our sick and tending to our needy. But it’s true – recently I’d begun to feel like I hadn’t seen him in weeks.

Then, last week, while I was working on this sermon, Christine texted me to say that someone who was not a church member had called the office for financial assistance. We were leaving for New York state in a matter of hours, and I had not packed my bag yet, or Davie’s bag, or fed the cat, or filled the cooler, or even taken a shower. Do you know what my first reaction was? “I do not have time for this!”  Oh, the irony! But yes, I was running the impossible logistics in my head and indignantly fuming that someone had called on the very day I had a million other things to do, including finishing a sermon about ignoring people in need.

Then I stopped, and laughed at myself (in my experience God has a great sense of humor), and said, “Thank you, Holy Spirit – and not just for the sermon illustration.”

Jesus is not in the business of limiting where he shows up to Sunday morning or to the lives of those we already know and love. That’s part of why we need the voice of the Shepherd calling us to care for those on the margins of our lives, people whom it would be inconvenient to serve or uncomfortable to care for.

So what I want to know this morning, friends, is: where is the Shepherd calling you? Where is Jesus longing for you to notice his presence in the face of someone you would usually ignore?

Because I’m convinced that the power of this illustration is not found in our fear about dying and being judged worthy of either heaven or hell, but in its ability to help us realize that we can create either heaven or hell here on earth, right now, both for those we serve and for ourselves.