Psalm 78:23-25
God commanded the skies above,
and opened the doors of heaven;

God rained down on them manna to eat,
and gave them the grain of heaven. Human beings ate of the bread of angels;
God sent them food in abundance.

The Jews then disputed among themselves, saying, ‘How can this man give us his flesh to eat?’ So Jesus said to them, ‘Very truly, I tell you, unless you eat the flesh of the Son of Man and drink his blood, you have no life in you. Those who eat my flesh and drink my blood have eternal life, and I will raise them up on the last day; for my flesh is true food and my blood is true drink. Those who eat my flesh and drink my blood abide in me, and I in them. Just as the living Father sent me, and I live because of the Father, so whoever eats me will live because of me. This is the bread that came down from heaven, not like that which your ancestors ate, and they died. But the one who eats this bread will live forever.’ [to the age]

He said these things while he was teaching in the synagogue at Capernaum.

When many of his disciples heard it, they said, ‘This teaching is difficult; who can accept it?’ But Jesus, being aware that his disciples were complaining about it, said to them, ‘Does this offend you? …The words that I have spoken to you are spirit and life.’

This is the passage that’s turned more than one Baptist I know into Catholics. After all, if you’re inclined toward the more literal end of scriptural interpretation, it’s a little hard to ignore Jesus’ words about his flesh actually being the bread that will save you from death. For many people, my friends included, these words translate directly to “transubstantiation” – the Catholic understanding of communion bread and wine as the literal body and blood of Jesus.

And I get where they’re coming from – I think it’s a perfectly legitimate interpretation. Because while you could easily argue that “I am the bread of life” is a symbolic statement, it’s a little harder to get around phrases like “‘Very truly, I tell you,” – Jesus speak for “I REALLY mean this!” – “unless you eat the flesh of the Son of Man and drink his blood, you have no life in you.” It’s almost like the author of the gospel of John foresaw our tendency to shy away from the gory implications here, and decided to nip it in the bud: “Nope. You’re not getting around this one.”

Since the Reformation, though, our faith tradition has opted for the understanding that Jesus is spiritually present in the bread and the cup, not physically so. This saves us from being cannibals – phew! – but I think it also does us a larger favor.

You see, if communion is about being made holy by ingesting Jesus’ flesh, that’s an easy box to tick.

Bread was it in the ancient world – the meal the Israelites ate on their way out of Egypt, the stuff David and his hungry soldiers ate on the run from King Saul, the thing Jesus multiplied to feed crowds. [Bread was the last thing the widow of Zarephath made for herself and her son before they resigned themselves to starvation; and it was what God, through the prophet Elijah, provided to ensure the widow and her son would make it through the famine.]

That central symbolic role holds through into modern times. Though many of us today avoid carbs or gluten altogether, we have no trouble grasping the story, told in the book Sleeping with Bread: Holding What Gives You Life, of traumatized children in World War II refugee camps who were able to sleep only when holding a piece of bread in their hands – a physical reminder not just that they would go hungry no more, but that there were people who cared for them and would help them heal and thrive.

So it’s no surprise that when we hear Jesus say “I am the bread of life,” it resonates deeply with those basic longings we as humans have – for sustenance, security, belonging. Who among us hasn’t hungered for a greater sense of meaning in our lives, for freedom from our past mistakes and healing for our wounds, for a deep sense of being understood, for assurance that we are loved just as we are? In short, who hasn’t hungered for a relationship with something – or someone – that feeds us?

That’s what an understanding of communion as Jesus’ spiritual presence offers us.

Not that it’s always easy to accept that sustaining nourishment when it’s offered. As someone hypothesized at Bible study on Wednesday night, maybe the revulsion we feel at John’s cannibal imagery is a sign of just how hard it is to internalize – literally in Greek to ingest – the things Jesus is teaching. If you’ve ever attempted to find the freedom in forgiving someone who has deeply hurt you, or tried to give up worrying about tomorrow, or struggled to love someone who really gets under your skin – or just love yourself – you have some idea of just how challenging this work is. There’s a reason the disciples say, “This teaching is difficult. Who can accept it?”

Tony Hendra, the British writer and satirist perhaps best known from his days at the National Lampoon and his role as the manager in Spinal Tap, found it indeed a challenging concept. In Father Joe, a memoir about Hendra’s faith journey, he describes his plunge as a young man from luminous, light-filled faith into a despairing, doubt-filled agnosticism that undermined his relationships and sense of worth, to the point of self-sabotage; bitter divorce, extensive drug use, and suicide attempts punctuated his adult years. Even his comedy work – satire which mercilessly targeted people in power but never seemed to change anything – felt worthless, hollow: “I had failed, period. I had nothing of worth. No hope, no faith, no God, no intellectual resources, no desire to use them if I had.”

But through it all, Hendra had a rather unorthodox companion: Father Joe, a big-eared, floppy-footed Benedictine monk whom Hendra had met as a teenager. 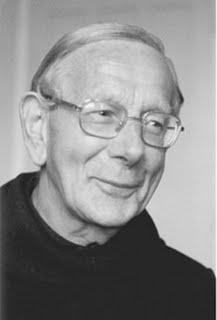 Despite his self-avowed atheism, whenever Hendra’s life took an especially dark turn he would make the trip to Father Joe’s isolated abbey on the Isle of Wight.

When his second marriage began to crumble, Hendra “began to feel the tug of [the monastery] as never before. Not the customary run-to-Father-Joe-in-a-crisis either. There was something much more elemental about the impulse this time, something irresistible.” Something Hendra longed for but had difficulty articulating.

After Hendra’s rambling, out-of-practice confession, Father Joe asks him to say what’s on his heart.

“ ‘I…I seem incapable of love, Father Joe. Utterly incapable of feeling it, even thinking it. Even wanting it. No, that’s not true. I want to love, terribly. But it won’t come. It feels the way a sin used to. Like when you got a present as a kid and for no reason at all you’d smash it into little pieces…and you’d be put somewhere alone, because alone is how the wicked are punished. You said something like that once, didn’t you? Hell is being alone for all eternity? Alone, unloved, unloving?’

…[Father Joe] didn’t seem to have heard. He was absolutely silent. His face was at rest, eyes still closed, in reception mode.

‘Tony dear, you will only be able to love when you understand how much you are loved. You are loved, dear, with a limitless…fathomless…all-embracing love.’

…Like a tidal wave overwhelming the breakwaters of common sense came the thought that this slowly shrinking, mud-flap-eared old elf of a man was…God.

Or a body God would from time to time in habit.

But I didn’t believe in God.

[Nevertheless]…Something in me came alive, like the glow of a pilot light, a match lit in the distance at dusk.

‘…Boundless love, Tony dear, is giving you a second chance.’”

Jesus says “Whoever [consumes] me will live because of me. This is the bread that came down from heaven, not like that which your ancestors ate, and they died. But the one who eats this bread will live forever.” You may remember that the way this Greek phrase we translate as forever is literally “for the ages”; it was used in Jesus’ time to communicate not a life without end so much as a life that holds value long past the current moment, a life made up of what’s truly important in the long run. Or, in the words of one of our Bible study participants, a life that “feeds the real you.”

After a long, arduous struggle, Tony found what fed the real him. It turns out he was hungry not the attention he’d sought through comedy and showbiz, but for the boundless, affectionate love of God, expressed through an unassuming monk.

What I wonder this morning is – what feeds the real you? What are you hungry for? Is it peace in the midst of uncertainty? Is it acceptance in the face of rejection? Is it solace in the face of loss and pain? Is it wholeness in the face of trauma or healing in the wake of betrayal? Is it freedom from the weight you’ve carried so long?

What is the bread that will give you life?

And to access all this we don’t have to actually eat God’s body; it’s not magic, any more than humble flour, water, and salt being transformed into edible, nourishing bread is. It’s just the way God’s boundless, sustaining love for us works.