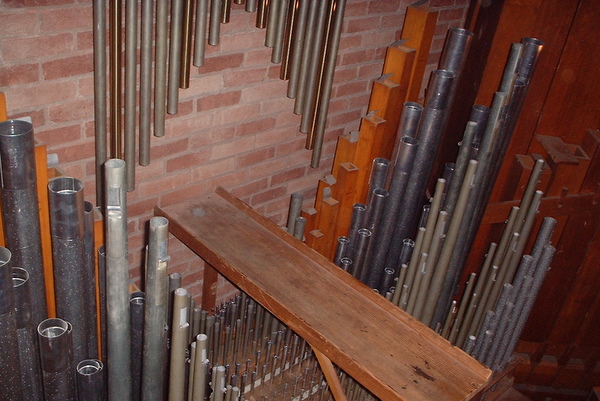 We have recently renovated the console for the Skinner Organ.  To read an article about the newly completed work, view a pdf here.

PACC’s E. M. Skinner Organ was originally built for St. Mark’s School in Southboro in the 1920s and moved to PACC in 1961. E. M. Skinner was a gifted, innovative and often controversial builder whose work was of the highest quality. The end of the 1800’s and early 1900’s was the Romantic period for organ style and Mr. Skinner wanted to make organs that sounded like an orchestra; in fact, he was credited with creating many orchestral stops to reproduce that orchestral sound. Skinner started about 1904, had his heyday in 30’s and 40’s and continued making pipe organs even till 1950’s. In recent years, the musical and historic qualities of Skinner’s organs have engendered increasing esteem and appreciation from a growing number of organists.

Of this particular instrument, Peter Sykes, organist of the First Church in Cambridge, has written, “It’s a grand, beautiful resource; value it, and take care of it. You will never regret it, I can assure you.”

When the organ was installed at PACC, some stops were not transferred. At that time, Neo Baroque was the “in” style: a bright, harmonic full sound (which was especially good for performing Bach pieces). The organ builder in charge of that move made some changes, eliminated some stops, added others, and made tonal changes to brighten the organ’s sound. 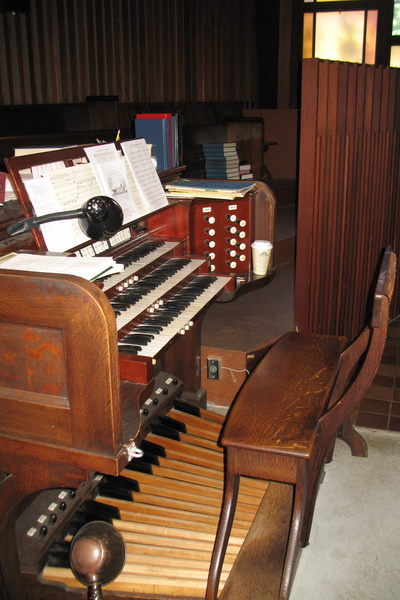 There are 3 keyboards on our organ. The top keyboard is the “swell” manual (those pipes are in a box with louvers to crescendo/decrescendo the sound, hence name “swell”). The middle keyboard is the “main” manual, and the bottom is the “choir” manual (which is a small division of mostly “special effects” such as clarinet, flutes). The organ specification lists all of the ranks in the organ.

Originally organs had a single row of pipes with a slide mechanism to start and stop sound, so that is why controls are called “stops”. Pipes are generally assigned numbers according to the length of pipe, e.g. 8′, 4′, 12′. Organ pipes can be made from wood, zinc, lead, and a tin/lead mixture. As tin is added to lead, it strengthens the pipe, and gives it a brighter sound. There are 4 families of pipes: flute, strings, principal and reed. The flute pipes are square and made of wood, while the others are metal. Reed pipes are flared in a conical shape, and the string pipes are thinner than the principal pipes.

At left is a view of our old console, below is the newly renovated one.