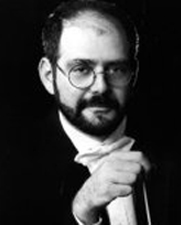 Jeffrey Brody became Music Director and Organist of Park Avenue Congregational on Easter of 2007.  He is the Music Director of Longwood Opera and Principal Accompanist of the Paul Madore Chorale, and pursues an active musical career as composer, conductor, vocal coach, collaborative pianist and organist. Appointed to the musical staff of Seattle Opera in 1986, he has done the musical preparation of that company’s critically acclaimed production of Wagner’s Der Ring des Nibelungen. He has also done musical preparation for Sarah Caldwell’s Opera Company of Boston, Boston Lyric Opera, Opera New England, MIT Chamber Opera, and the Princeton June Opera Festival. Some of the international singers he has worked with include Richard Cassilly, David Cangelosi, Patricia Craig,Warren Ellsworth, Eva Marton, Magda Olivero, Leonie Rysanek, and Giorgio Tozzi.Mr. Brody has been Music Director of Longwood Opera since 1998 and was appointed Musical Advisor of the Boston Wagner Society in 2005.He made his orchestral conducting debut with the Richmond Festival Orchestra in a program of all original works. Most recently, he guest conducted the Salem Philharmonic Orchestra at the invitation of Music Director Alan Hawryluk.His compositions include works for orchestra, chorus, chamber music, and organ. They have been performed in Boston’s Symphony Hall, Jordan Hall, the Washington National Cathedral, the Cathedral of St. John the Divine, St. Patrick’s Cathedral, the Vienna Konzerthaus, Altenburg and Munster Cathedrals, the Phillips Collection in Washington, D.C., the Virginia Waterfront International Music and Arts festival, the prestigiousd festival “La citta, la musica, e il sacro” in Venice, and on National Public Radio.Recent commissions include Beowulf, a musical Legend for double chorus and large orchestra, written for performance in the Vienna Musikvereinsaal, as well as Planetarium, written for the Arlington-Belmont Chamber Chorus.

Mr. Brody is a member of the International Siegfried Wagner Society; the American Society of Composers, Authors and Publishers; the National Association of Teachers of Singing; the American Guild of Organists, and is a founding member of the Boston Singers resource, for which he has served as audition adjudicator. In honor of the many years of his artistic collaboration with the late Boston Symphony Orchestra Organist, Berj Zamkochian, the Gomidas Organ Fund presented Mr. Brody with the baton used by Charles Munch, Music Director of the Boston Symphony orchestra from 1949-1962.

For more information, read about our music program and listen to recent performances of Mr. Brody’s work.