Glimpse into the Past

On Wednesday nights, the Park Avenue Congregational Church echoes as a lively band plays a tune from a distant time.

There’s a lot of banter back and forth among the band, the participants, and the caller, Michael Cicone, of Waltham.

If it weren’t for the modern amenities, such as electric light and hot coffee, it might seem like a moment from a period film.

But it’s not about costumes, or characters.

For those who attend, it’s all about the movement, the music, and the camaraderie of a shared love of English country dance — a folk art finding a place in modern times, thanks to devoted practitioners and recent dramatizations of Jane Austen novels, in which dance hall scenes are key. 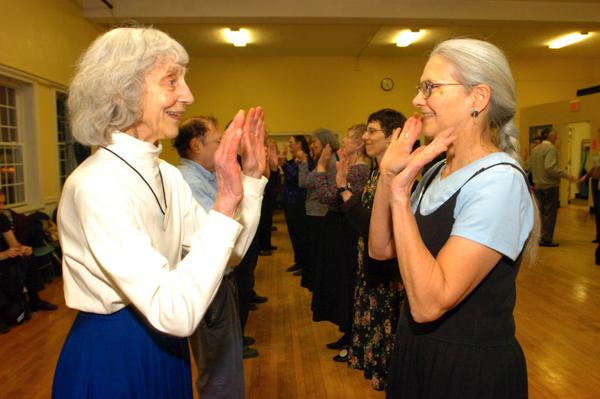 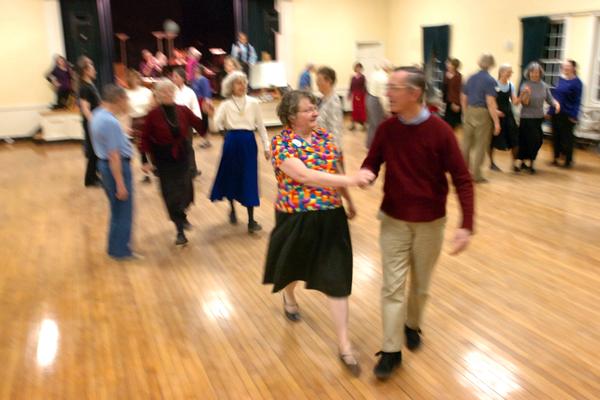 Photo by Ellen Bullock. Lyrl Ahern of Acton and Victor Skowronski of Woburn join in the festivities.

During a break, Harvey Cohen, of Brookline, Linda Nelson, of Cape Cod, and Nancy Hanssen, and her husband, Arthur Ferguson, of Framingham, said they are part of a loyal following of country dances.

Cohen said he first became interested in the 1970s, when he joined a country dance group in Copley Square in Boston. “People first get involved, and then they find it’s very enjoyable.”

Nelson, also a dance caller, said, “I’ve been folk dancing since 1973,” and said she gravitated toward English country dance around 1990. “A friend said, ‘come along,’ and I’ve been doing it ever since.”

Nelson doesn’t even mind the long drive. “It’s just that we have so much fun,” she said.

Hanssen said, “I started when I lived in the Berkshires in the 1970s.” She added, “It’s a community…I love the graceful movement, and the beautiful music.”

Liz Reisberg, a society board member, said the dances are related to Renaissance dances and part of a family of folk dances, including contra dancing, which have endured in popularity in the area.

Among other activities, many lovers of these dances meet at an annual dance camp at Plymouth, a kind of reunion for those who share a common passion for the dances.

“I think that you find within the community a pretty diverse group,” Reisberg said. “There are people who are academics, professors, computer professionals, people who are in construction, artists, musicians, weavers — it’s pretty much a mix of backgrounds.”

The dancers have varied reasons for finding the dance attractive, including the live music, the history of the dance and the social aspect of the dance events. “I listen to the dance music even when I am not dancing,” Reisberg said.

Reisberg said those who are devoted to the dance hope to ensure that the tradition continues.

“We are thinking of doing more outreach,” Reisberg said. “It has gone on for several generations, but we are not finding new participants any more.”

Reisberg said the society may consider holding performances at area churches and other venues in an effort to spread the word.

In the meantime, however, some new people do come and give the dances a try, as they did on a recent Wednesday night.

“There were three new people who walked in the hall. We noticed the new people right away. Several people made an effort to invite new people,” Reisberg said, adding that regulars try to be supportive because “It can be a little intimidating.”

She observed, “It’s such a fun thing to do. People just don’t know we are in their backyard.”

A once and future dance

By all accounts, Helene Cornelius of Arlington, a society member, dance instructor and caller, is one of the area pioneers of English dance.

She cited Cecil Sharp, an English musician and dance historian who immigrated to the U.S. in the early 20th century, and sparked interest in the dance here after researching and teaching the dances to classes, mostly comprised of women, in London.

“From him, the word spread. He wanted to bring these dances back to the people. These dances had been written in the 17th and 18th centuries. He wanted the people of England to realize what they had,” Cornelius said.

In his new home in the U.S., Sharp founded the Country Dance and Song Society.

In the Greater Boston area, the dances took hold, and lately have seen some renewed interest with the prevalence of films with period settings — including picturesque film and television interpretations of Jane Austen novels.

Some dances have a collective origin and no specific authorship. Some are attributed to 17th and 18th century authors, and some contemporary dancers and musicians have written original songs and dance.

“Nowadays, a lot of people are interested in creating their own dances,” Cornelius said.

She recalled, “When I first came to Boston, a long time ago, I never had done any folk dancing. Where I worked, people were going to Ralph Page’s Square Dancing. That was the big dance then, Tuesday night at the Y.”

She added, “Back then, a woman came to the Scottish class, and taught a sample Morris dance class. She and I decided, ‘we might as well try that, too,’ that was followed by an English country dance class.”

Asked what is the greatest appeal of English country dance, Cornelius said, “To me, it’s the music, essentially, and then doing these patterns. Some are very simple, and some are very complex. It doesn’t require any extraordinary physical feat — no complicated foot work, no acrobatics.”

For many, the long-standing friendships formed over time are also a draw.

General admission is $9; members are $7, students and newcomers are $4. Beginners are welcome. Partners are not necessary. For more information, e-mail Liz Reisberg atl reisberg@gmail.com. To learn more about the Country Dance Society, Boston Centre, visit www.cds-boston.org.