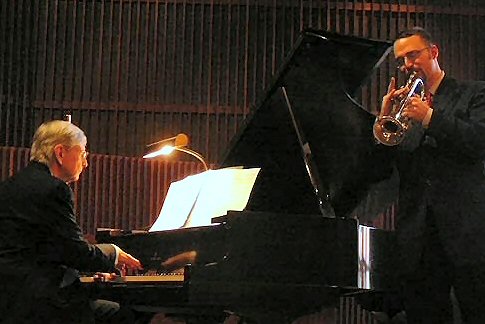 Bach and the Lyric Trumpet & Organ

Internationally-renowned trumpet soloist Christopher O’Hara will be performing a concert entitled “Bach and the Lyric Trumpet and Organ” with composer, organist, and pianist Mark Engelhardt in a concert on April 21st at 3 PM. This fourth concert of the season is the first to showcase the totally-refurbished organ console. The event takes place in the Sanctuary of the Park Avenue Congregational Church in Arlington. Tickets in advance are $15 adults and $10 seniors and students; and at the door $20 and $12. To reserve advance tickets, call 781-643-8680 and leave a message if necessary (tickets will be held at the door). A post-concert Artists’ reception will be held in the Parish Hall.

The first half of the concert will explore music of Johann Sebastian Bach featuring music from Cantatas, Concertos and Orchestral Suites, and the second half will showcase lyrical music for trumpet and keyboard from such composers as Satie, Copland and Faure. These two outstanding Massachusetts-based musicians were very well received in a number of past appearances at PACC, and the refurbished organ console should be a pleasant surprise for Mark Engelhardt.

Chris and Mark began their association in the late 90’s when they played together in a lunch concert series sponsored by the Cathedral Church of St. Paul, Boston, where Mark was the Director of Music. Over the years they have had the opportunity to play together often, and after a concert at PACC, they produced a CD that celebrates their collaboration entitled “Johann Sebastian Bach.”

In addition to playing solo trumpet, Chris O’Hara is a chamber musician and an educator. He has performed in over 2,000 events covering 47 states and 11 countries. He is the founder of the Alliance Brass Quintet and has recorded for the Paraclete and AAR record labels. Chris has served on the faculties of several Institutes and Conservatories as well as presenting numerous master classes and clinics at top schools. He has appeared on National Public Radio, NBC, WGN, and the Hallmark Channel among others.

Mark Engelhardt has been heard in concert throughout the United States as well as in England. Mark conducts organ master classes and has a long career conducting volunteer and professional choirs in a wide range of musical styles. He presently serves as Organist and Choirmaster at St. Peter’s by the Sea and has been heard on the American Guild of Organists broadcast as well WCRB. Mark has composed several works for liturgical performance.