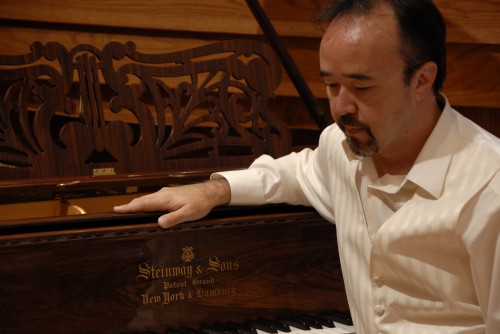 Conversations from the Piano

International Steinway Concert Artist James D’León brings a “Conversations from the Piano” approach to the first PACC Concert Series event this season on October 6 at 3 PM. He will be performing works by Mendelssohn, Corigliano, a pairings of two Spanish works, the Boston premiere of Southern Lament by Montague and Liszt’s popular Hungarian Rhapsody No. 2 (with cadenza!).

The concert takes place in the Sanctuary of the Park Avenue Congregational Church, located at 50 Paul Revere Road, in Arlington Heights. An artist’s reception in the Parish Hall will follow the concert. Tickets in advance are $15 adults and $10 seniors/students; and at the door $20 and $12.

D’León’s performances have garnered critical praise from audiences and critics everywhere. The Philadelphia Inquirer stated that he performed with “exciting pianism filled with powerful emotion” and The Salt Lake Tribune commented that “D’León was a musical sorcerer who mesmerized the audience with every note.” For more information on D’León and his concerts, check out his website at: www.jamesdleon.com.

Born in South Korea into a musical family, James D’León began playing the piano at the age of 4 and performed his first recital at the age of 5. After relocating to Pennsylvania at the age of 14, he debuted with the Philadelphia Orchestra performing the Rachmaninoff Piano Concerto No. 2. He continued his piano studies with George Sementovsky, who greatly influenced his style, refined his technique, and formulated his philosophy of piano performance, especially in regard to physical movement. He eventually received the Doctor of Musical Arts degree in Piano at the Eastman School of Music.

From there, he won praise in many international piano competitions and made his New York Debut at Carnegie Hall, which helped launch his career. In 2009, he was selected as an official Steinway Artist on both the prestigious New York and Hamburg, Germany rosters. Since then, he has performed in England, Ireland, Italy, Germany, Canada, and 43 states throughout the continental United States. His busy summers have included performances at the Banff Festival in Canada, the Boyle Festival in Ireland, the Schlern Festival in the Italian Alps, and the Mendocino Music Festival on the northern California coast.

Today, D’León is known as a rare and completely versatile pianist who is just as comfortable performing a concerto as he would be playing a solo recital or collaborating with a chamber music group. He continues to dazzle audiences and keep them on the edge of their seats with his commanding technique, expressive body movement, and searching interpretations.

For more information on the PACC Concert Series, please call the Church Office at 781-643-8680 or visit the Church’s website at www.pacc-ucc.org/events/concertseries. The Church office is closed in the afternoon, but messages may be left on the Church’s answering machine to reserve tickets. The Church is located on the corner of Park Avenue and Paul Revere Road (one block from Mass. Avenue in Arlington Heights), is handicapped-accessible and on MBTA bus route 77.