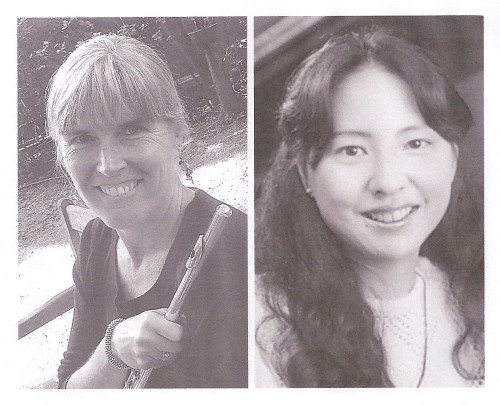 From Formal to Fanciful. . .
Music for Flute and Piano

The final concert of the 2011-12 PACC Concert Series features Andrea Hart and Margaret Cheng Tuttle performing a program entitled, “From Formal to Fanciful. . . Music for Flute and Piano,” on Sunday, May 20 at 4 PM. Park Avenue Congregational Church is located at 50 Paul Revere Road at the intersection of Park Avenue and Paul Revere Road, one block from Massachusetts Avenue in Arlington Heights. The Church is handicapped accessible and on public transportation via MBTA bus route #77. A reception will follow the concert. Tickets in advance are $15 for adults and $10 for seniors/students; $20 and $12 at the door. Proceeds benefit the Church’s Music Program.

Andrea Hart, flute, and Margaret Cheng Tuttle, piano, bring to their collaboration a rich and varied set of musical experiences. Both studied with eminent musicians in the Boston area and have performed in numerous concerts as well as having taught in various settings. For this concert, they will play music appealing to both adults and children. The program includes sonatas by Bach and Poulenc, Claude Bolling’s jazzy “Baroque and Blue,” and transcriptions of descriptive pieces for young audiences, such as Debussy’s “The Little Shepherd” and Saint-Saëns’s “The Swan.”

Andrea Hart has been active as a performer, teacher and director in various musical realms for over twenty years. Her degrees include a Bachelor of Music from Boston University and a Master of Education from Harvard University. She has performed as flutist, pianist and chamber musician with numerous Boston-area groups and has collaborated with students and faculty at the New England Conservatory, Berklee College of Music, and Boston University. She has served as Music Director at Creative Arts, a community school for the arts, and as General Manager for internationally acclaimed world music ensemble Libana, and has sung with The Boston Cecilia, The Longy Chamber Singers, and The Mudville Madrigal Singers. In addition to piano and flute, she has taught music theory, sight and choral singing. She is currently on the music faculty at the Cambridge Friends School and is Youth Music Director at Park Avenue Congregational Church.

Margaret Cheng Tuttle has extensive performing and teaching experience. She holds a Master of Music degree from the New England Conservatory. As a soloist and chamber musician, she has performed at Jordan Hall and most of the major colleges and universities in greater Boston, in concert series in her native Midwest, and as far away as Taiwan and Iceland. She has performed concertos with a number of orchestras and has been heard in radio broadcasts in Boston (live on WGBH), the Midwest, and Israel. She enjoys collaborating with composers and has premiered several compositions. She taught piano at the Rivers Music School in Weston for 14 years, and was an Emerson Instructor of Piano at MIT. She is in demand as an adjudicator for piano competitions held by the Massachusetts Music Teachers Association. She performed in an enthusiastically-received duo piano program at PACC in 2009.