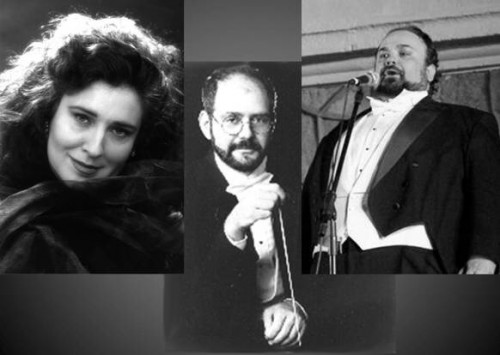 Arias, Songs and Duets with Passion and Drama

Come hear the versatile and passionate supreme master singers, Francisco Casanova, tenor, and Joanna Porackova, soprano, performing high-voltage duets, arias and songs at the Park Avenue Congregational Church on March 18 at 3 PM. In describing the selections for this concert, Ms. Porackova states: “I think this would describe the nature of our music…we are either dying, crying, or causing drama of some sort.” Humor aside, these internationally renowned singers are providing us with a very rare opportunity to hear them perform the music they love in the intimate setting of the Church’s Sanctuary with its excellent acoustics. They will be accompanied on piano by PACC’s own accomplished Jeffrey Brody.

This special event is the third in this season’s PACC Concert Series. Tickets in advance are $15 adults and $10 seniors and students; and at the door $20 and $12 with all proceeds to benefit the PACC Music Program. We are honored to host a post-concert Artists’ reception in the Parish Hall.

Mr. Casanova has sung more than 50 operatic leading roles at opera houses the world over including the Metropolitan in New York. As his early training progressed, he moved from the Dominican Republic to Spain and gained the life-long support of his mentor, Maestro Pier Miranda Ferraro. Mr. Casanova’s interpretations have been hailed around the world, including his interpretation of Riccardo in Un Ballo in Maschera, and Carlo Moor in I Masnadieri (both operas by Giuseppe Verdi), as well as his debut at Milan’s La Scala in Verdi’s I Due Foscari. In May of 2004, Francisco Casanova was the first non-Italian singer to be awarded the Beniamino Gigli D’Oro by the Museo Beniamino Gigli of Recanati.

Ms. Porackova, is also a winner of numerous awards and competitions and has performed leading roles and solos throughout the world, including at the Salzburg festival with the Berlin Philharmonic under the direction of Sir Simon Rattle. In this country, she has performed in many states, from Alaska to Miami, including with the Boston Lyric and Bel Canto Operas. Hailed for her heartfelt sense of the music’s inner drama, she is also known for her majestic soaring sound and huge range. Ms. Porackova has been heard in broadcasts on Swiss National Radio, Good Morning America, WGBH, BBC, NPR WBUR, and ARTE and on the Bel Air Classiques DVD of Die Walküre with the Berliner Philharmoniker, released in 2009.

Currently Music Director of Longwood Opera, Jeffrey Brody is active as composer, conductor, vocal coach, organist and collaborative pianist. Appointed to the musical staff of Seattle Opera in 1986, he has served as Assistant Conductor and Prompter for that company’s acclaimed production of Wagner’s “Ring”. He has also done musical preparation for the Opera Company of Boston and Boston Lyric Opera. As Music Advisor of the Boston Wagner Society, he selects repertoire and artists for their concerts and is a frequent contributor to their quarterly, Wagneriana. He is presently Music Director and Organist of Park Avenue Congregational Church, Arlington and staff accompanist at New England Conservatory.

The program will include duets from the operas Tosca by Puccini, Cavalleria Rusticana by Mascagni, as well as Il Trovatore and Aida by Verdi. Solos and arias will cover quite a range including Rachmaninoff, Dvorak, Tchaikovsky, and Camille Saint-Saens, among others.

Park Avenue Congregational Church is located at 50 Paul Revere Road at the intersection of Park Avenue and Paul Revere Road, 1 block from Mass. Avenue, in Arlington Heights. The church is handicapped accessible and on MBTA bus route #77. For more information on the concert series please call the Church Office at 781-643-8680 or visit www.pacc-ucc.org/events/concertseries.