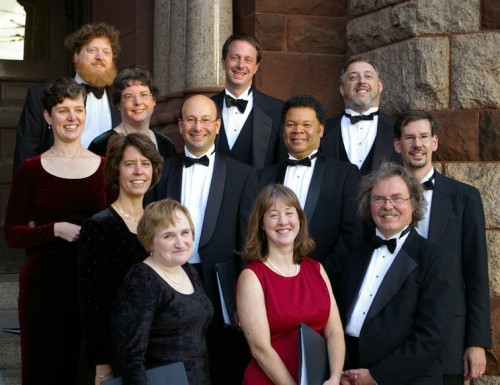 The beautiful a capella voices of Vox Lucens will again grace the sanctuary of the Park Avenue Congregational Church in Arlington Heights.  This concert will take place April 3, at 3:00 p.m. and is the fourth in the 2010/2011 PACC Concert Series to benefit the Church’s Music Program.  Tickets in advance are $15 adults and $10 seniors and students: and at the door $20 and $12.  A post-concert reception will take place in the Parish Hall where Vox Lucens’ CDs will be available for purchase.

In their program “Stories Sacred and Secular,” Vox Lucens tells vivid stories through the music of the Renaissance masters.  In the music of Victoria, Morales, Guerrero, Palestrina, Flecha and others, Vox Lucens will depict sacred stories including biblical tales of Mary and the other women discovering the resurrection and the conversion of Paul on the road to Damascus.  Lest things get too serious, they will conclude with a few madrigals, including a humorous one that tells the story of a shipwreck complete with cries for help, hasty prayers, a party after being saved (with guitar accompaniment), and a pious moral in Latin.

Vox Lucens is a small (currently 13-member) vocal ensemble that came together in 1998 to explore the Renaissance sacred and secular a capella repertoire. Under the direction of Jay Lane, they perform popular favorites as well as lesser known works, often in their own editions.  They have performed locally in concerts and church services as well as with dance and theater groups.

The singers come from diverse backgrounds.  Many have advanced musical training, and other singing affiliations.  Members of the group have performed in musical styles ranging from opera, folk, and Celtic, to Gilbert and Sullivan.  The singers make clear their love for singing with Vox Lucens in their own words below:

Mary Briggs of Lincoln, is a surgeon who says, “To me, singing Renaissance music has a magical quality – and not just as a figure of speech.  When we sing a capella, somehow a beautiful new creation arises from everyday household objects like reasonable singing voices.  In my mind’s eye, each voice creates a liquid beam of sound with others to construct a magnificent cathedral of harmony.”

Although Barry Goldberg of Melrose has sung many styles not only in rehearsals but “while in the shower, driving in his car, working at his computer and walking down the street…he eventually discovered that the close-knit harmonies and small ensemble dynamics of early music provided him with the most soul satisfying experience.”

Diane Taraz of Arlington explains, “Singing early music is my team sport.  We work together to create something none of us can do on our own, and we pass the key phrases from part to part like a soccer ball heading for a goal.  By enjoying our own parts and responding to the others, we achieve a wonderfully satisfying artistic victory.”  Diane is also a song writer with many CDs to her name (see www.dianetaraz.com).

Jean Monroe of Maynard states, “After being immersed in these works weekly for several years, I’m amazed how different they all sound,” and John Nesby of Cambridge speaks about the emotion in the music, “I enjoy music from the Renaissance because the music has an essence of the joy of humankind.”

Laurie Francis-Wright of Arlington writes, “We get together and create beautiful harmonies on a regular basis.  Some people do yoga, some people meditate – I sing early music with a group of terrific people…”

Jessica Raine of Somerville speaks of many types of learning, “Rehearsing with Vox is an ongoing education, not only in music, but in history and historical context and language; we all come together because of our common interest in differing aspects of this material, and we’re all learning from each other, all the time.  It’s amazing.”

See www.voxlucens.net for more information about the group.

Park Avenue Congregational Church is located at 50 Paul Revere Road at the intersection of Park Avenue and Paul Revere Road, 1 block from Mass. Avenue, in Arlington Heights. The church is handicapped accessible and on MBTA bus route #77.   For more information about this concert or the series please call the Church Office at 781-643-8680 or visit www.pacc-ucc.org/events/concertseries.