Genesis 12:1-3
Now the Lord said to Abram, ‘Go from your country and your kindred and your father’s house to the land that I will show you. I will make of you a great nation, and I will bless you, and make your name great, so that you will be a blessing. I will bless those who bless you, and the one who curses you I will curse; and in you all the families of the earth shall be blessed.’

John 3:17
Indeed, God did not send the Son into the world to condemn the world, but in order that the world might be saved through him.

For Lent, my husband Chris and I have agreed that whenever we come home from work, we will put our cell phones in a basket by the door so that we can be more present during family time, and we’ve given each other permission to hold the other person accountable. “Phone,” he gently reminded me the other day as I sat buried with my nose in my device at the kitchen table. “But I’m building houses for Rohingya refugees!” I protested. “Give me a minute!” (I should have probably been on my phone somewhere else, like the bathroom – that’s where you go to use your cell phone if you’ve given it up for Lent.)

It’s no secret that I’m a sucker for online giving campaigns for good causes. Chris has learned to stop asking about charges appearing on our debit card statement for things like piles of diapers for displaced Syrians or a Lin Manuel Miranda song to support Puerto Rico’s (still ongoing!) hurricane relief effort. There’s something that feels so good not just about giving to responsible organizations doing great work, but about doing it alongside thousands of other regular people who all want to make the world a better place.

When you click through to the link to help build a house, you land on a donation page for Love Army, the on-the-ground non-profit employing local Rohingya to build ecologically friendly houses with dignity. You see that the original goal for the Rohingya houses was $1.8 million, which when I (late to the party) donated had already been blown by, with over $2 million raised – and that the very first donation made was for just $10. Knowing that thousands of people cared enough about strangers halfway across the world to donate whatever they could spare – even as little as $10 – to shelter them and, more importantly, to let them know they are loved, just blows my mind.

I have to admit, it’s kind of addicting – showering people with love, bringing them one step closer to wholeness, doing it with a whole bunch of other kind-hearted people. And honestly, who wouldn’t want to be a part of something called Love Army?

We may not think of it in quite this way, but the church was the original Love Army. You may remember this description from the scripture we read a few weeks ago about the early church: “All who believed were together and had all things in common; they would sell their possessions and goods and distribute the proceeds to all, as any had need. Day by day, as they spent much time together in the temple, they broke bread at home and ate their food with glad and generous hearts, praising God and having the goodwill of all the people. And day by day the Lord added to their number those who were being saved.”

That word “save” is the same “save” in this morning’s Gospel passage – and although it probably makes some of us think of proselytizers and the sinner’s prayer, as you might recall, a fuller translation of the Greek word for “save” is “to rescue from destruction and bring into divine safety, wholeness.” Those early church people were building a Love Army to care for and love on any of God’s children who happened by, to bring them out of whatever disasters or despair they might be facing and into divine shelter, and no doubt it was pretty heady and rather thrilling and gave them a deep sense of purpose and meaning in their lives.

I think we all long to be part of something like that – something bigger than ourselves, a collective effort and emotion that lift us out of our disconnected and distracted lives and leverage us into a place of wonder and belonging and transcendence.

Johann Hari, who wrote the book Lost Connections I talked about a few weeks ago, argues that we as creatures are programmed to need that feeling of transcendence to get us out of our own heads and restore both our perspective and our feeling of connectedness. Being in nature is one way we get there: “a range of scientists have shown,” Hari writes, “that a common reaction to being out in the natural world is…a feeling of awe,” the “precise opposite of [the] sensation,” common in depression and anxiety, of being trapped inside your own head. Being in nature “helps you see the deeper and wider ways in which you are connected to everything around you,” concludes Hari.

When was the last time you felt deeply connected to everything around you? Was it on a hike or a walk around a pond? Was it donating to some great cause online? Maybe it was a work trip to help people recover after a natural disaster. Maybe it was volunteering at a homeless shelter. Maybe it was organizing with a group of friends to help get your coworker to chemo appointments or maybe it was attending a gala to sponsor a scholarship.

You know, the last several times I’ve felt that way in real life (not just clicking a “give” button online) were here, at church. Some of those moments would have fit right in with the early church: being part of a team that seamlessly stepped up to cook meals for a family recovering from surgery, or listening to Tina Gramm tell how the PACC Bible study her dad had so cherished came to sing hymns and sit vigil with him in his last days.

Some have been a little less typical, as church goes, but no less powerful. This week I trekked with PACC folks to Arlington High School as part of the national walkout in support of our students’ right to learn safe from gun violence – and I saw Reese Hogan’s face light up when she realized her church was there to support her and her fellow students. Last Sunday, I watched a room of PACCers light up with ideas about how to support the young women of Germaine Lawrence/Youth Villages through fishing field trips and drum circles and gospel choirs and more. And I will never forget the buzz I felt – like I’d drunk late-night coffee and had electricity shooting through my skin – after room-fulls of people raised gobs of money for Partners in Health and the Syrian American Medical Society. One girl brought her friends to Soup for Syria for her 10th birthday and asked for donations instead of presents, y’all. Talk about being part of something bigger than ourselves – something inspiring, something transcendent.

I have a hunch that church is one of the best places to get our transcendence fix – to be part of a Love Army, both to the people who have made their way inside our doors and to those who live down the street or across the world. And I have a hunch that our church can be a lightning rod for that high I felt – that we can function just like the luminous night sky on your bulletin cover, an incandescent reminder that what we do here is larger than life, of ultimate meaning and beauty. 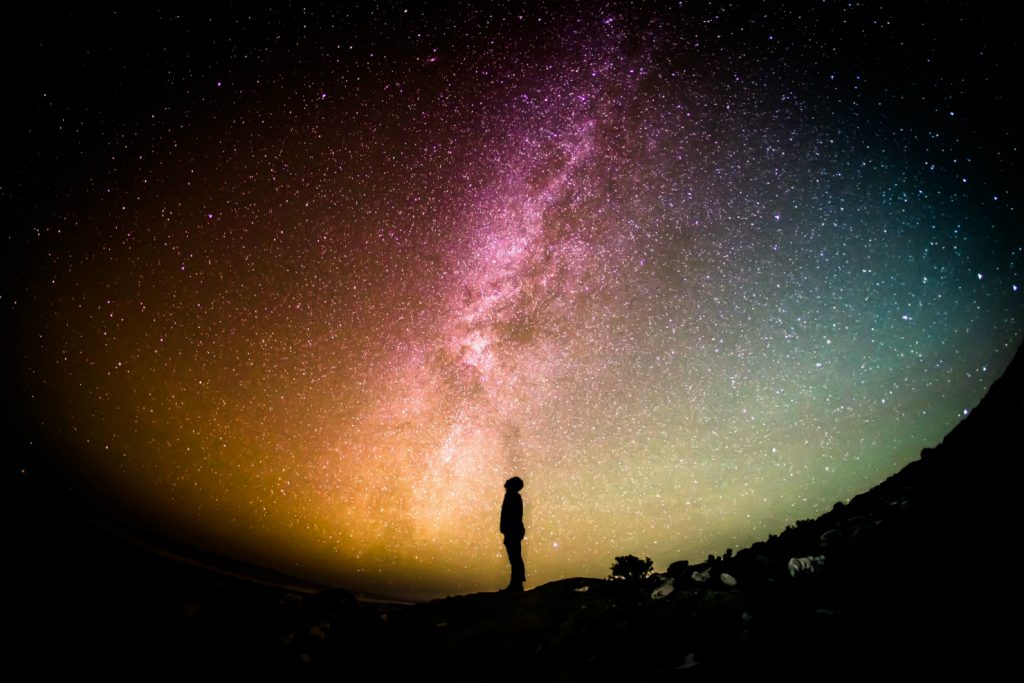 I would argue that that’s actually what our faith tradition – what following Jesus – is all about. Remember the very first disciples who left their nets and followed Jesus? In the words of Lin Manuel Miranda’s Hamilton, those brothers were “longing for something to be a part of,” a bigger view of the world, a larger life, a way of being that utterly transforms the every day because it launches us out of the narrow confines of our individual lives and into, well, space – God’s view of everything, saturated with love and wonder.

Last week I preached on how part of leaving our nets behind is stepping out of our comfort zone – that following Jesus often makes us feel a bit foolish. On Ash Wednesday this year I stood alone with a giant sandwich board on the front steps of the sanctuary offering Ashes to Go during the morning commute. 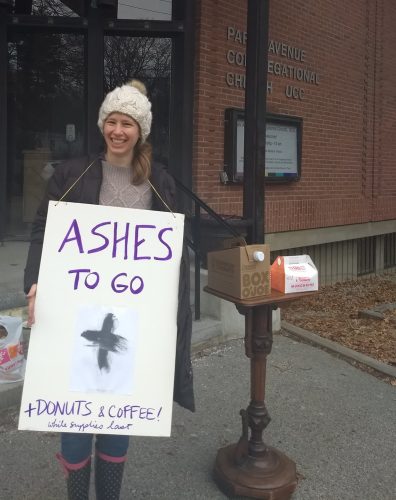 No pedestrians wanted to meet my eye; no one stopped driving to get out and partake. Feeling cold and yes, rather foolish, I was starting to wonder if this had really been a good idea. But then Christine Rochon showed up with donuts and coffee; and later Kate Lindheim joined us. And a strange thing happened. Strangers began to honk at us and flash a thumbs up. People we’d never met before stopped and got out and asked for ashes and told us they were thrilled we were there.  One man on his way to work could not wipe the smile off his face; he kept exclaiming how great this was, looking up at the church building like he couldn’t quite believe we were there.

I have to say, I would never have believed that ashes, that penitential act meant to remind us that one day we will all die, would be so – fun, so…delightful. But I think people are hungry for a way to acknowledge that the sacred, the transcendent is woven all in and through our everyday moments. I think they are hungry for blessing – to be part of giving and receiving God’s goodness on a grand scale.

Like Sarah and Abraham before us, we are called to be part of that giving and receiving – and not just within this community, but with strangers on the street and halfway around the world. We are called not to keep the good news to ourselves but to share with all who hunger for it that sense of belovedness, of wholeness, of blessing.

Our gospel reading this morning reminds us that that, after all, is Jesus’ Why: not to condemn the world, but to save it – to rescue us from destruction and bring us into divine safety. To build houses and cook meals and send diapers and give healthcare and recognize sacred moments and walk alongside each other. To transmit, quite simply, God’s electrifying love for all creation so that we might be lit up as we light the way for others.

As far as I’m convinced, there is no greater purpose.