Park Avenue Congregational Church had its beginning in an ecumenical group of worshipers who met in Union Hall, the building that is now Arlington Coal and Lumber. The part of Arlington known as Arlington Heights was just beginning to be well-settled in the early 1880’s. In October of 1881 a non-denominational group that included Congregationalists, Methodists, and Baptists started holding religious services and Sunday School classes. By 1885 this group felt it was time to have a proper church building, so a group of businessmen called “The Proprietors of the Church at Arlington Heights” organized a corporation to raise funds to purchase a site and build a chapel in the Heights. They received $2500 in pledges, and work began on the new church building.

At this point the women of the neighborhood were called to a meeting, which resulted in the formation of the “Ladies Chapel Guild.” These women took in sewing and held suppers and entertainments once a month, but their big effort was a “grand fair and bazaar” on December 7 and 8, 1885, which raised $700, a not inconsiderable sum in those days. The Ladies Chapel Guild still exists today as PACC’s Women’s Guild.

On December 30, 1885, the new wood-frame church building was dedicated. 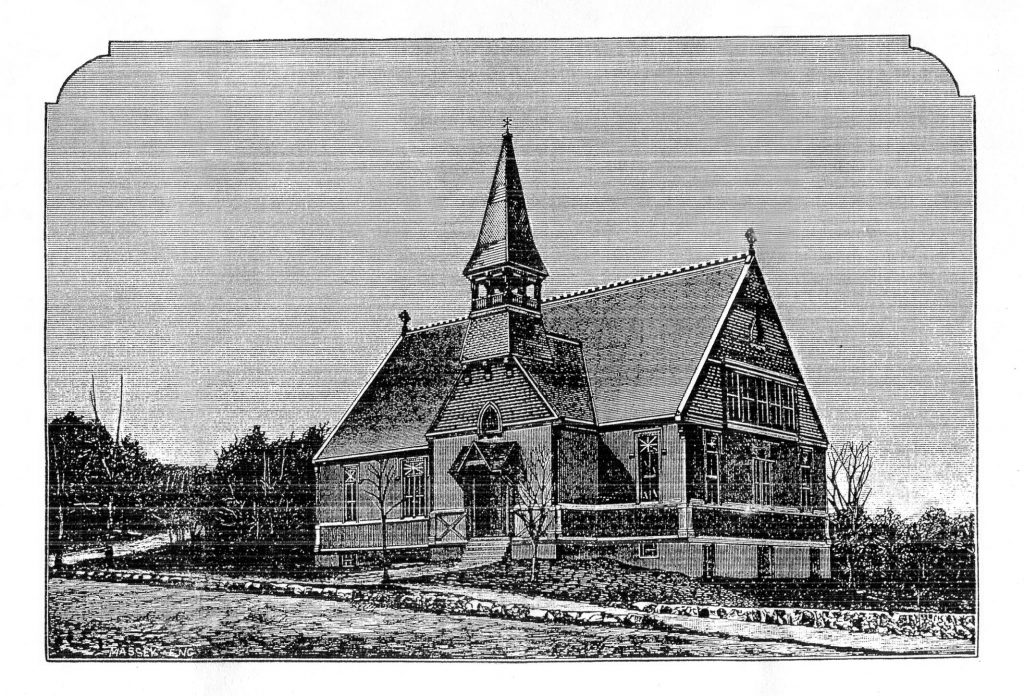 The original church building in 1885.

Non-denominational services were held there for the next few years. Eventually two church groups were organized, the Union Parish and the Evangelical Parish, which shared the use of the building. It finally became evident to the proprietors and to the two parishes that it would be best to unite in one church organization. 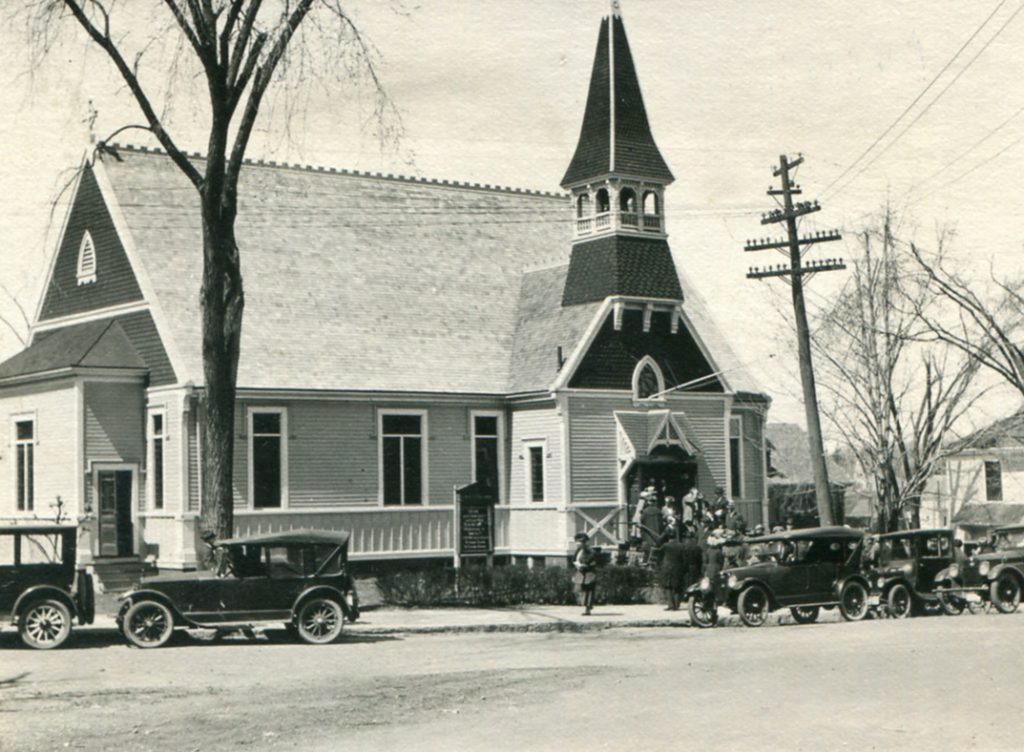 That original wood-frame church was the home of the Park Avenue Congregational Church for many years. In 1928 the adjoining brick building was completed. The downstairs, with a kitchen and large Parish Hall, was completed that year. The upstairs was left unfinished until the winter of 1945-46, when it was completed to add office space and additional meeting and Sunday School rooms. 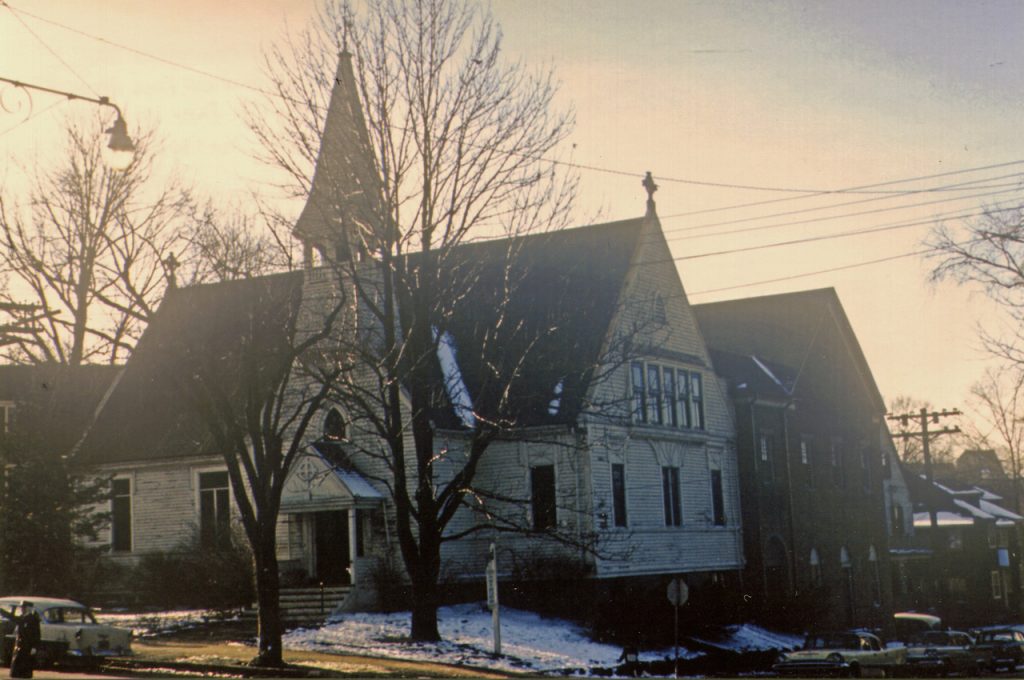 The original wooden church and brick addition in the 1950s

Churches were thriving in the 1950’s, and PACC was no exception. It became clear that the church building was not in good shape and was not adequate in size for the congregation. At the Annual Meeting of 1959 the congregation voted to build a new church building on the site of the old one. The Annual Meeting of 1960 approved the plans and authorized the start of construction.

1961 was a big year for Park Avenue Congregational Church. On January 11, 1961, the congregation voted to become part of the newly-formed United Church of Christ (UCC). On Easter Sunday of that year, the first worship service was held in our new brick and concrete church, designed by the talented and internationally famous architect Pietro Belluschi.

Laying the foundation for the new building: 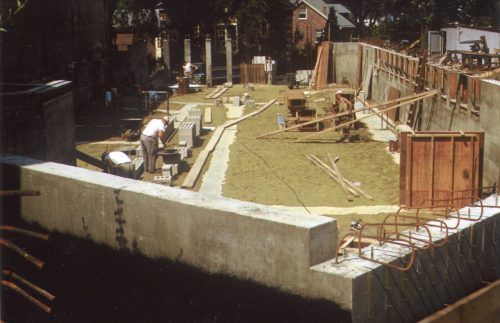 The distinctive frame of the new sanctuary: 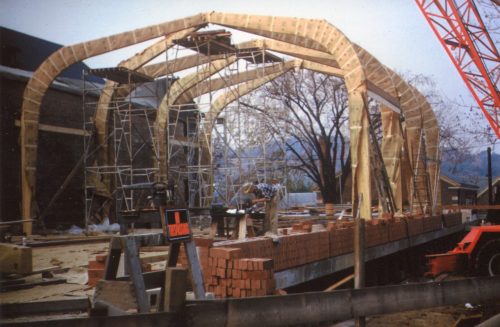 The spire is added: 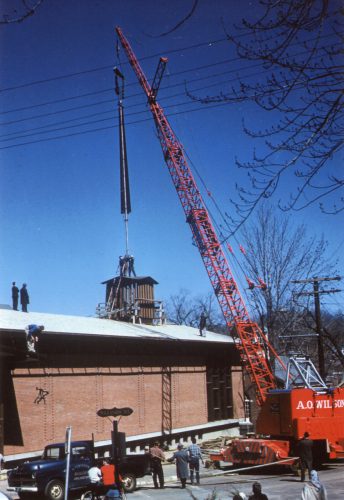 Our youth decorate the beautiful Easter flower cross
given to us by Pleasant Street: 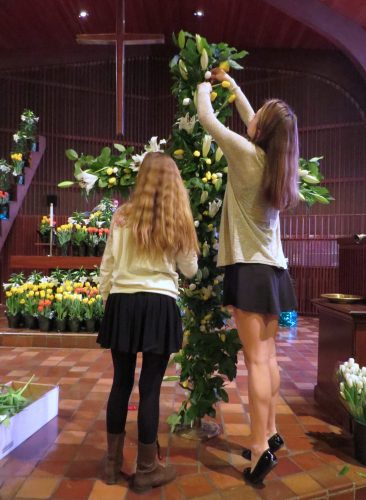 Another milestone moment was PACC’s vote to become an Open and Affirming congregation on May 6, 2007. Open and Affirming (ONA) is the UCC’s designation for churches who have made a public covenant of welcome into their full life and ministry to persons of all sexual orientations, gender identities, and gender expressions. 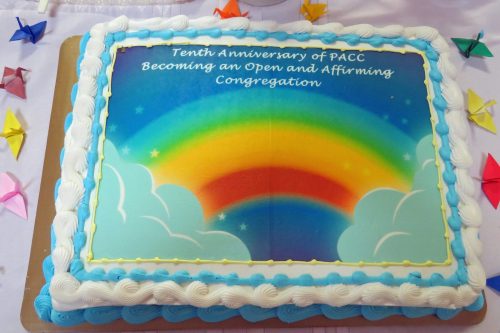 In 2015 our beloved pastor, Bill Albright, retired after a 19-year ministry at PACC. After a nearly two-year interim period, we called our current pastor, Leah Lyman Waldron, who has served since August 2017. Learn more about Leah here.

Though we are proud of our building and our various milestones along the way, we know that the church is truly the people. Our community is our greatest gift, and we’d love for you to be a part of it. Visit us on Sunday mornings to experience the welcome that is Park Avenue!